skip to main | skip to sidebar

Spring Teachings About New Life - Support from our elders the tree nation of ancestors! 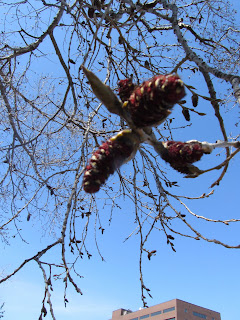 I am grateful for the coming of spring and the reflection I see in new life in this cottonwood tree by my apartment in St Louis Park. Here is a close up of the swelling bud of the red catkin of the cottonwood tree. 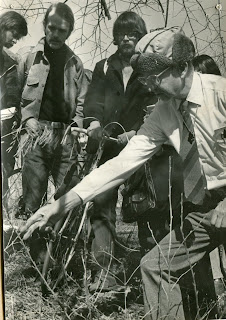 Thinking of my Field Botany Mentor, Donald Lawrence PHD, pictured here along the Mississippi River gorge with students, including Matthew Wood, Herbalist Author with the bike. In the spring we would go for walks this time of year along the east bank of the Mississippi from the Botany Greenhouse, then on East River Road. I was a teaching assistant in the 1970's at the U of M for Don in a course called Field Botany. Don taught us to recognize that characteristics of plants so we could learn from them about their place in ecology. We would drive to Cedar Creek each week to look at the natural history of a plant that selected each student to study. I remember one student, Sue, who worked with the hazel and noticed the small flowers this time of year. Thanks Don and Lib Lawrence for your generous vision and support with your teaching and generous work at Cedar Creek Natural History Area that you helped establish. Thanks for sharing in your cabin there as well! 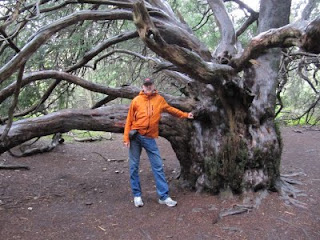 Reflections on the trees of life. Here I am with an over 2000 year old yew in the are of the south of England in 2009. Story has it the yew forests were cut down to create long bows for the wars of the two leggeds. Such grace and grandeur being with this old relative. And how amazing it is still here as a beacon to another time. Trees can talk!
My elders have continued teaching me about noticing and how trees are so grounding to many humans. One of my Lakota teachers often reflects that each tree reflects the Lords Prayer of the Christian tradition, so above we can Create Heaven here on earth. Already the chan oyate "tree nation" are here as our grounded relatives living with the Creators instructions. Showing us to have deep resilient roots. The trees create oxygen and bring water up for air conditioning and transpiration of the planet we share with them. Recently several of this trees' relatives were cut down that were shading my garage here in my apartment complex. This morning I took out tobacco to pray for the give away of the tree nation and thank them. . Also I prayed this morning for understanding for the need for sustainable harvesting of our forests and plants all over the world so we can live in harmony for the next seven generations with all the plants and animals here on Mother Earth. 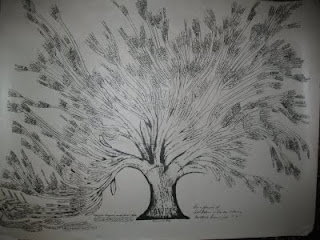 Here is one of my family trees: The Cole or Cowles Family that came over from the Gloucestershire area in 1635 to New England. I pray for health for the tree nation as well as the two leggeds so we can live here on Mother Earth in harmony for many generations to come. May we all walk in peace, love, joy and harmony on our earth journey. Mitakuye Oyasin.
Posted by Thomas Glessner Weaver at 6:54 AM 1 comment:

Amazon Herbs- Connection with the Rainforest. 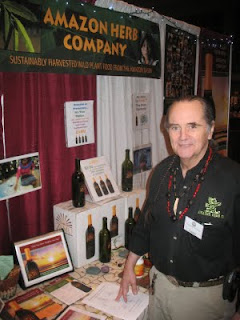 Here is my friend, Ted Harrison, who is pictured at an Amazon Herb booth at the Minneapolis Convention Center. Ted is the man who first introduced me to Treasure Tea and Una de Gato in 2005 prior to my meeting John Easterling as outlined below. Thanks Ted for your ongoing support of these plant foods that come from Pacha Mama, Mother Earth.

Starting the Blogging Journey - Wild Herbal Foods This is text from an entry I have in my regular blog from SUNDAY, FEBRUARY 1, 2009

I was inspired by Linda Youcha, who moved to Mexico a while back and began a Google blog, to begin this blog to share part of my journey. This past week, I decided to learn more about some Wild Plant Food from the Amazon Rain Forest, as envisioned by the folks at Amazon Herb Company. As a little background, I met the Founder and CEO, John Easterling over four years ago in Davenport Iowa, home of the Palmer School of Chiropractic where he and some Midwest Amazon Herb Ambassadors, including Maryann Hesse , Lynn Mayfield and Ron Bond shared their powerful healing stories. It was then I decided to begin eating the 5 core products developed by naturopaths from four different countries to support human body systems. In addition to the (1) Shipbo Treasure Tea (and Una de Gato) I had began eating during the winter cold season, after picking up some of the Treasure Tea from Ted Harrison, a friend and elder from the ManKind Project, I started with the other four core products: (2) Fiberzon "intestinal broom", (3) Illumination "multiple herb nutritional suppliment", (4) Sumacazon "adaptogenic endocrine balancer from two ginseng like plants from South America, suma and maca", and (5) Aquazon "blue green and marine fucus nutrition." I now began a journey of inner health, with plants, that Cleanse, Nurture and Balance Body Systems".

Read more about Amazon Herbs here on my site, under Products and Service, clicking on the hyperlink "Order Amazon Herb products here" to find information on a plethora of fine herbal foods.
Posted by Thomas Glessner Weaver at 11:12 AM No comments: